We've had had several enquiries recently about whether we could recommend some club-friendly iPad apps. Having done some investigating, this is what we found out.

Which apps use the camera?

When browsing through the App Store, it’s not particularly easy to see which apps could access the camera when downloaded onto your iPad. Anything that offers on-line multiplayer or on-line chats, is likely to want to access the camera (but not necessarily).

Don’t assume that apps/games which are rated age 4+ are off-line only or won’t request use of the camera.

Preventing apps from accessing the camera

Although it can be difficult to tell before you download it whether an app will try to access the iPad's camera, it is quite easy to check which apps on your iPad want to access your camera: 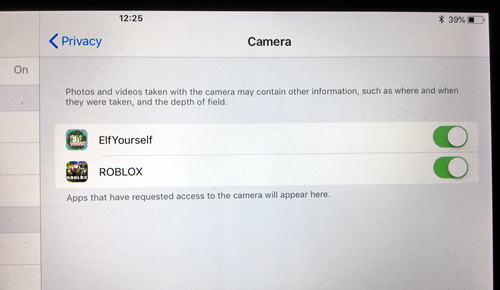 We therefore recommend that you always check the Camera settings on your iPad after you have downloaded an app, and make sure that all the buttons are set to 'off'.

Restricting the apps that the children can use

It is also possible to lock a tablet or phone to a single app, before handing it to a child. This can be useful if, for example, you have very young children at your club that you want to keep away from games and apps that are aimed at the older children. PC World has an article which explains how:
See the instructions for locking an iPad to a single app

We discovered a great website, called Common Sense Media, which recommends apps, games, websites and books for children. It has reviews from parents and from children to help you decide if a game is right for you.

It lists apps according to age group, which is really useful, and they also list apps which don’t require internet access, which could be very helpful in the context of an out of school club setting.
Visit the Commonsese Media website to identify suitable apps